Flipkart to focus on higher monthly active users in 2018

Flipkart to focus on higher monthly active users in 2018

BENGALURU: Homegrown online retail market leader Flipkart believes that it has made competition irrelevant in 2017 and that the company will now focus on increase in the monthly active transacting customers as the key metric, going forward, said Flipkart CEO Kalyan Krishnamurthy in an interview to ET.

He also called 2017 a year of “revival of confidence in the Indian consumer internet industry” as Flipkart managed to raise about $4 billion from global technology majors like Japan’s SoftBank, China’s Tencent and US corporations like eBay and Microsoft which is a validation of its market leadership.

“We have seen a very big confidence boost. The ecosystem in India is now very clear that there is a market leader in India in ecommerce with a huge margin…..They have (Tencent, SoftBank, eBay, Microsoft) synonymised growth in the Indian internet market with Flipkart,” said Krishnamurthy. 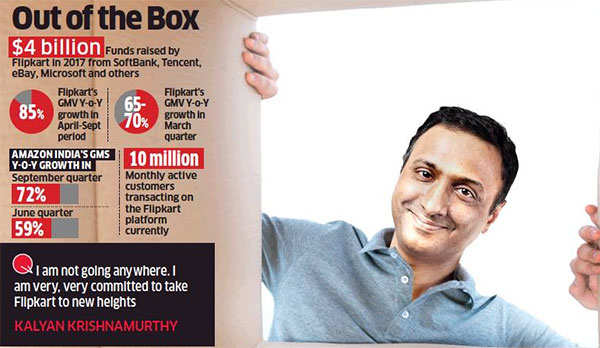 He said that his company has been able to establish market leadership in all the major segments of the online retail market in India and is the only player which is growing the market through innovations.

“In categories like fashion, both branded and unbranded, home, mobiles and appliances, which account for over 80% of ecommerce in India, we have a 75-80% of the share between Flipkart and Myntra,” said Krishnamurthy, who took over as the CEO of Flipkart one year ago when cofounder Binny Bansal moved to a group CEO role.

Both Flipkart and Amazon India recently claimed that they were growing faster than each other, but neither companies shared any absolute numbers. Flipkart said, in December, it grew at about 85% year-on-year in terms of gross merchandise volume (GMV) in the April-September period that included its flagship festive sales events, up from 65-70% growth in the preceding three months. Amazon India said it registered 72% year-on-year growth in terms of gross merchandise sold (GMS) for the September quarter, compared with 59% growth in April-June.
Krishnamurthy said that going forward in 2018, the metric that Flipkart will be most focused on is how increase the number monthly active customers who are actually transacting on the platform. This number according to him is just over 10 million right now which he aims to take to 80 million in the coming years. One of the key moves to increase this number will be the company’s entry in the grocery space, where it launched in Bengaluru few months and plans to expand to five cities by June 2018.  ..

According to Krishnamurthy, the company wants to build the grocery business with the right unit economics and profitability. “The biggest thing that we are shaping for is how do you shape customer behaviour to buy a bigger basket. Second thing that we are shaping for cost advantage in that category because it is a low average selling price category in India,” said Krishnamurthy.

Another way Flipkart is looking to increase the number of transacting users on the platform is by looking at investments across companies in areas in which it is not present. It recently held talks with food-delivery players like Swiggy and Zomato, movie ticketing platform BookMyShow and home services startup UrbanClap, where its payment arm PhonePe can be leveraged. None of the investment talks have fructified yet.

Krishnamurthy did not comment on potential investments, but said that “in 2018 we would like to grow that (monthly transacting customers) by a bare minimum of 2.5x”.

Krishnamurthy was a managing director at Flipkart’s largest investor Tiger Global Management and had served in various roles at the organisation like chief financial officer and head of category management. He has been credited with Flipkart’s turnaround since joining the organisation in June 2016, helping it keep the lead over Amazon India in the crucial festive sales over the past two years and bringing back the focus in the organisation.

Over the past few months the speculation about Krishnamurthy leaving the organisation has increased, but he denied any such plans.

“I am not going anywhere. I am very very committed to take Flipkart to new heights.”